The global marketing community only seriously moved from the classic, linear and very logical theories of purchasing to acknowledging the dominance of emotion in consumer purchases a decade or so ago. Equally, identity politics have always been significant but have come to the fore in recent years. Emotion in decision-making seems to be everywhere. 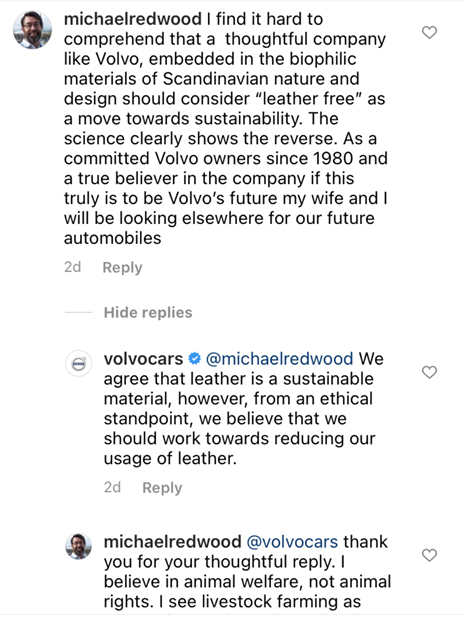 Back in March 2021, when Volvo began to talk about terminating leather upholstered seating, I received a response to my comment on the value of retaining sustainable leather. It said: “We agree that leather is a sustainable material, however, from an ethical standpoint, we believe we should work towards reducing our usage of leather.”

Since then, their marketing statements have become quite strident, and it has been a struggle to understand what appears to be a muddle at the confluence of Volvo’s ethics, emotion and logic.

My close family have been involved with Volvo (as car owners, we fall into the category of default buyers) since buying our first, a 340, in 1984, and have continuously had at least one in the drive. It was always an “ethical” vehicle to the extent that it was safest in an accident and lasted longest on the road.

There was a certain biophilic alignment when their interior designer for the XC70 went through the car with me at an ISPO Conference in Munich. Graining on the dashboard represented Scandinavian rivers and streams and the overhang above the controls was shaped like snow hanging over the eaves. The sleek central panel and radio area related to Scandinavian furniture crafted from native trees.

What then could be more compatible than long-lasting leather, made entirely from renewable hides available as a by-product of north European grass-fed livestock, who are almost totally part of either regenerative or carbon neutral systems? Ethically and logically, I struggle to imagine a better material for Volvo.

Volvo, even under its new Chinese owners (Geely), appears to be a wise and thoughtful company so jumping to the conclusion that this is a cynical ploy to maintain margins while pretending some form of veganism or sustainability would be wrong.

Nevertheless, Volvo have broken quite a lot of their own rules in the rush to become electric, go public, float Polestar and so on. If the idea is to be more sustainable, why move to such a weighting of large, heavy SUVs which use a lot of materials, damage the roads, are too wide for small city streets and are a danger amid horses and cyclists in country lanes? When will they be reducing the steadily increasing amount of plastic they use?

Have Volvo checked their facts?

If their issue is ethics related to animals, have they checked they use no animal glues, no cattle based stearic acid in the tyres, no animal fats in their plastics or textiles? Have they considered the balance between animal rights and animal welfare, the role of CWP* versus CWP100 related to livestock methane and the associated opportunities to use livestock farming to benefit biodiversity and reduce global warming? Have they considered the billion subsistence semi or fully nomadic livestock farmers who depend on their animals to survive?

I struggle to believe that they have. I struggle to accept that this is a considered policy. And I see no reassurance in the muddled options they are offering to replace leather. It may of course be the case that emotion has trumped ethics and logic. In a way I hope they do, but the decision has evidenced a company that has moved from a leader of the pack to a poor follower of fashion and profit.