The magic of the sheep

In his final comment of 2021, Mike Redwood looks at sheep and examines all of the benefits they have offered us throughout history, from leather to wool to felt.

As we end the second year of pandemic, nearly all of my ILM articles have been written at a desk looking out over an ancient abbey house and church on whose parkland sheep have been grazed for at least 700 years.

Did you know that about 12% of the leather in the world is made from sheepskin? I have recently started reading Sally Coulthard’s A Short History of the World According to Sheep and, although only part through, it feels like a good end of year topic and still in time to get a copy to read over the holiday if it piques your interest.

Wild sheep were regularly hunted for millennia for their meat, which was considered very tasty. Around 11,000 years ago, communities began to form in the Fertile Crescent and basic farming started. At Asikli Hoyuk in Central Turkey, archaeologists have uncovered diets that abruptly changed to dominantly lamb from an extensive mix that included fish, deer, hare and tortoise; sheep had started to be “domesticated”.

It was soon found that large numbers could be managed by one person with the help of dogs, and often they retained an inheritable memory of pastureland where they could be safely left; something now known as “hefting’ in the hills of the UK’s Lake District.

They were bred for easier handling and to improve the wool output. Throughout the ancient world, as well as meat and wool, sheep provided milk, cheese, lanolin and dung (for fertiliser and fires). As well as leather, skins became important for parchment production and many religious institutions kept them for this purpose.

Early research of 800BC Scythian tombs in Central Asia in the 18th century found fabulous artefacts in metal – gold, bronze and iron – but recent excavations of tombs opened as the permafrost melts are uncovering perfectly preserved organic materials – wood, textiles and leather.

For the moment, ignore the incredible rawhide scaled armour – 56 rows of hard scales with leather backing and skirts, which is the best preserved ever found, and the unbelievable red leather woman’s footwear (a lot of Scythian warriors were female) with soles decorated with beads and pyrite crystals stitched into the leather; impressive when she sat cross-legged in her tent at night.

Instead, think of the role wool played. These were nomadic people in cold climates who made elaborate wool and felt garments. Some of the world’s oldest, and finest, carpets have been found in their tombs. They recognised wool as a great insulator, giving out warmth when damp, holding a lot of moisture without feeling wet and water resistant while breathable. It is also difficult to ignite. 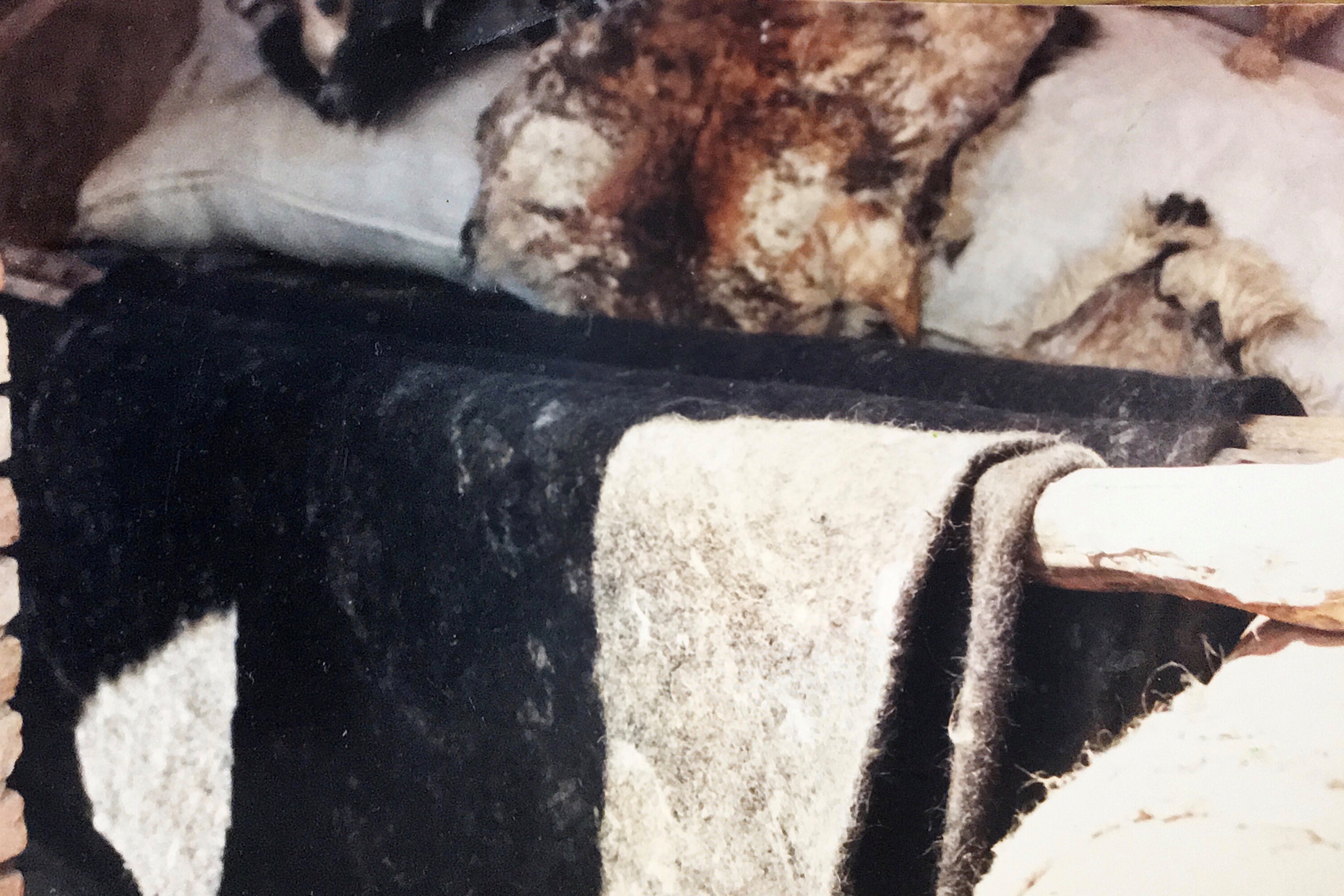 The wonder of felt

It was in Asia that I first saw felt being produced when searching for sheepskins in Gansu province in China in 1987 (pictured right). High in the hills, we found many small tanneries, mostly run by Muslims, and in a few we saw men building rolls of felt (only moisture, pressure and heat is required) to be pulled behind horses to integrate the fibres into what must be one of the very first non-woven materials. Felt was an essential material for travelling the ancient Silk Road. Think of hats, blankets, saddle rugs, tent covers, mattresses and even body armour.

Sheep have been important to the world in many ways including leather. Here in the UK, wool was the driver of the creation of Medieval wealth and the significance of the City of London, but long before that wool was used by Celtic peoples in days before and during the Roman occupation.

On the Scottish island of St Kilda, uninhabited since being abandoned as too remote in the 1930s, a hooded cloak was once produced from sheep’s wool and became popular with Roman soldiers. A family of five required 20 sheep to provide the wool needed for blankets and clothing but, according to Roman writers, Courtney tells us “they had no problems…raising impressive numbers of sheep and trading on an international basis”.

Wool is a high performance biophilic material that worked alongside leather in aiding the creation of society. Think of the sheep as we prepare for the perils and opportunities of 2022. Thanks for your readership this year and happy holidays.