The “death spiral” for meat in diets

What has happened to the meat industry? Is it so confident that the developing world will continue to turn to meat as the middle classes grow that it does not care about its image or reputation? Is it wise to brush off challenges related to climate change, land use, deforestation, animal welfare and dietary health as impertinent irrelevances which will never stop this steadily progressing juggernaut of an industry from carrying on as normal?

When Frédéric Leroy from Vrije Universiteit Brussel, Belgium, posted a timeline he had constructed, built with the reports and predictions from some respected - if not always accurate or unbiased - sources, he showed what he called a “death spiral” for meat in diets with a likely collapse of animal agriculture and end of meat and dairy products between 2040 and 2050. In the diagram, which I have reproduced from his social media, he quotes: @rethink_x, @ImpossibleFoods, @kearney and @richardbranson noting that @c40cities (a body connecting nearly 100 cities working on climate change) expect global cities to adopt the (semi)vegetarian #EATLancet diet by 2030.

When I posted a comment that this was sinister, given the huge money behind making this bad science a reality, I received a quick response, saying “If animals infect us, then we will not work with them is a new paradigm emerging. Stay indoors and work on engineering proteins is a predictable, calculable, efficient and controllable scenario.” 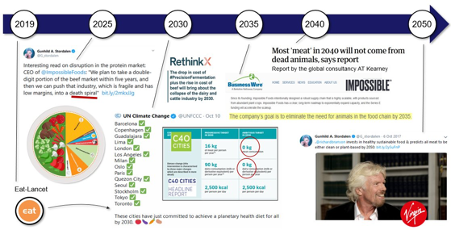 At the same time, the chief investment officer at Collier Capital wrote in the Financial Times that “Covid-19 is just the latest in a worrying increase of outbreaks of zoonotic pathogens, which are infections transmitted from animals to humans. These include Sars, avian flu, swine flu, Ebola and Zika”. He implied that even the Spanish flu of 1918 and 1919 probably came from pig farming. Added to this is how much antibiotic consumption in the US is related to livestock, a figure over 70%, and the fears of antibiotic resistance.

With academics such as Professors Leroy and Mitloehner now providing authoritative peer reviewed material and well written social media interventions, it is astonishing that the livestock industry is not uniting to get the facts straight. They have the cash and the scale to do what the very squeezed and traditional leather industry has struggled with, yet, the only voices seem to be sporadic interventions from soil associations and grass fed beef supporters.

With the data that shows the huge and valuable role livestock play in the environment, including the excellent paper by Leroy and Cofnas published after the EAT Lancet report, stating “that claims about the health dangers of red meat are not only improbable in the light of our evolutionary history, they are far from being supported by robust scientific evidence”, there is more than ample material for them to build on to set the record straight.

Livestock offers a route to worldwide climate neutrality
Along with this is the work from the Oxford Martin School team, showing that animal methane needs to start being correctly measured. According to Dr Michelle Cain from the Oxford Martin Programme on Climate Pollutants, “long-lived pollutants, like carbon dioxide, persist in the atmosphere, building up over centuries. The CO2 created by burning coal in the 18th century is still affecting the climate today. Short-lived pollutants, like methane, disappear within a few years. Their effect on the climate is important, but very different from that of CO2: yet current policies treat them all as ‘equivalent’.” They propose a new term to be used GWP* (Global Warming Potential) that recognises methane breaks down in the atmosphere and that livestock methane only has an impact if herds are growing. Their calculations, which move away from managing methane as though its effect was permanently worsening for the climate to one that better reflects the reality, means that with minor adjustments the New Zealand contribution to global warming would totally stop. This dovetails with the UC Davis work that shows how livestock can offer a route to worldwide climate neutrality.

All this powerfully demonstrates the positive, indeed vital, role livestock plays in diet, biodiversity, the biogenic carbon cycle and the quality of life on our planet. To demonise livestock on ideological grounds serves us very badly, yet the meat and dairy industry have hardly turned up for the fight for their future. Since Livestock’s Long Shadow was published in 2006, we have had rarely a whimper, and by all appearances the meat and dairy industry around the world appears more fragmented even than leather. In reality, the alarmed hide and leather industry have worked harder to defend the sector.

The most memorable meat industry intervention for many years came in the letter published as full-page press adverts from the usually silent billionaire John Tyson. Many of the big meat plants had been shut as a result of major Coronavirus outbreaks and he feared meat shortages in the U.S.. This persuaded the U.S. President to use Korean War powers to force the plants to reopen while apparently removing liability for employees’ health. While I have visited abattoirs and meat packers all round the world since the age of 14, I have never been to one of the large scale U.S. plants, so I cannot comment on the set up and conditions. What I can recognise is that the intervention has swept the world in a way that provides another weapon in the armoury of those passionate to attack livestock as a source of food. With mass unemployment looming everywhere, the risk of worker abuse is apparent, and large and respected corporations like Tyson need to be the standard bearer in such matters.

As a by-product user, the leather industry has no influence on the supply of hides, other than hoping for good husbandry and quality control, there is no doubt that we feel the pressure when the livestock industry is under attack. We have struggled to find our own voice, and remain fragmented, but we are starting to be heard around the world.

A careless silence
We require the meat, dairy and livestock to get together and fight back against the detractors. Livestock is good for the planet and leather one of the sustainable, valuable materials. We cannot afford to lose all this through a careless silence.